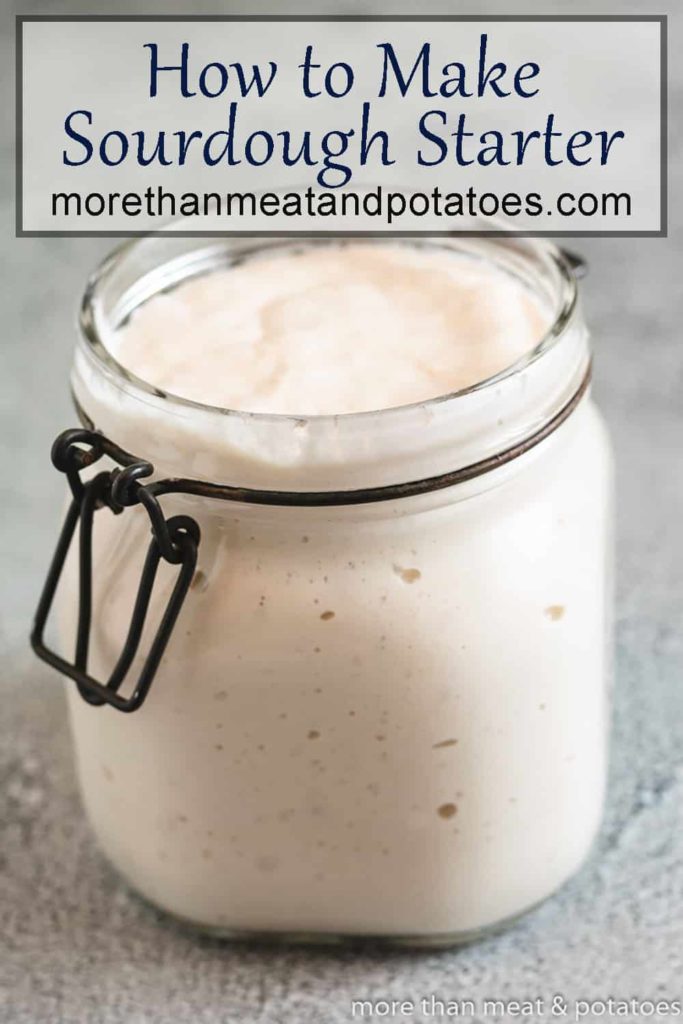 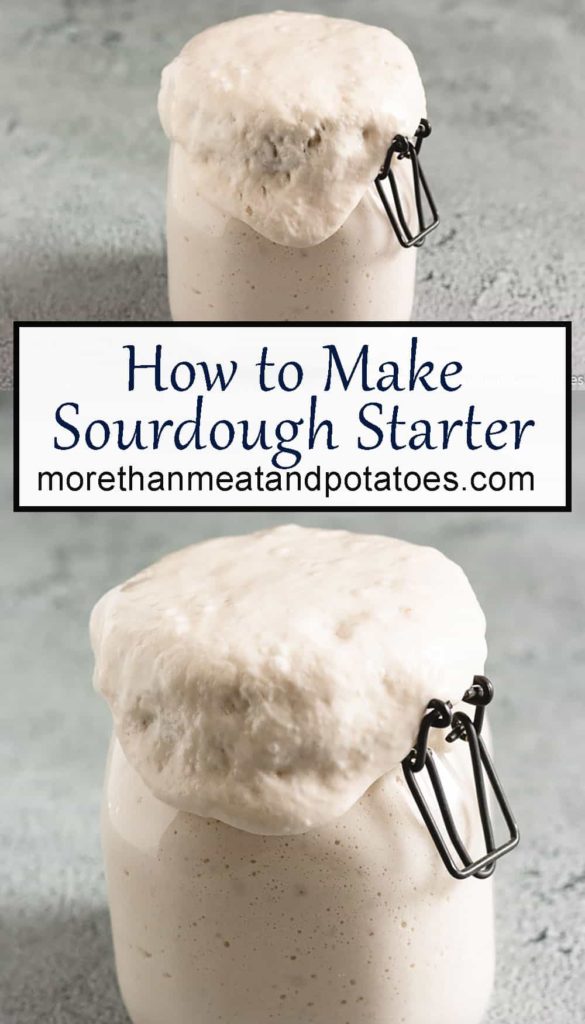 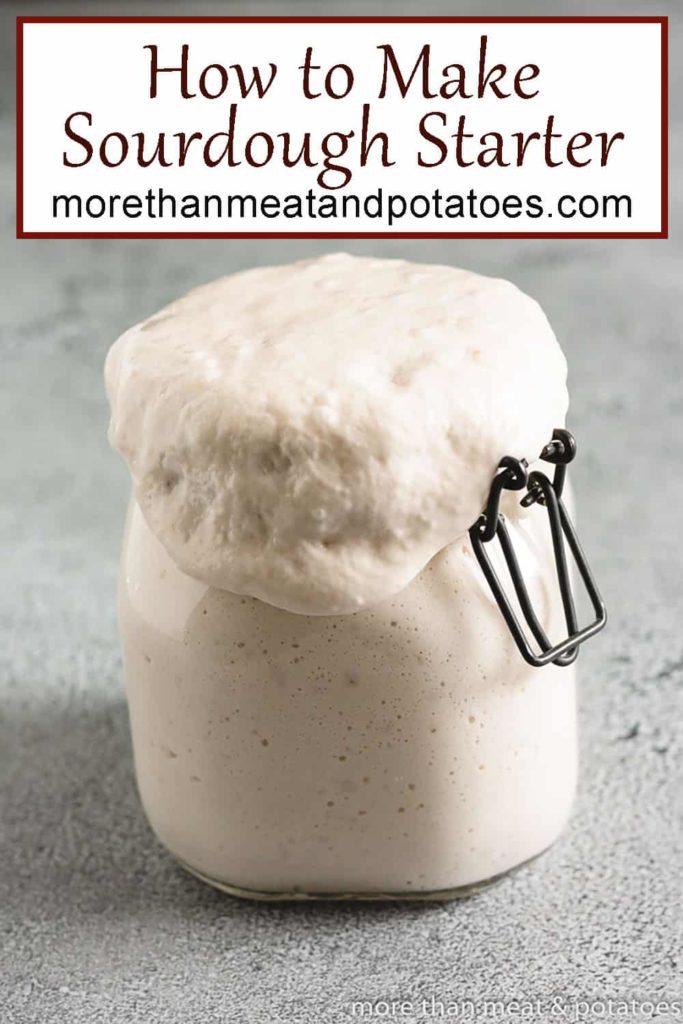 A beautiful loaf of homemade sourdough bread begins with an active, bubbly sourdough starter. Making sourdough starter from scratch isn’t difficult. It takes a couple of ingredients, patience, and consistency.

Over a year ago, a friend mentioned a type homemade bread that’s made without yeast. Being a person that loves making homemade yeast bread, I was intrigued.

She explained that this bread was made from wild yeast from flour and air and suggested a sourdough cookbook she’d been using. Of course, it was sourdough bread!

I’ve been enjoying sourdough for years, and some of my favorite loaves are from farmer’s markets or specialty shops. I’ve never thought about making it myself but wanted to give it a shot.

The more I researched and read about sourdough, the more confused I became. There were so many terms, abbreviations, and types of flours.

It seemed so overwhelming that I almost didn’t try. That’s why I want to show you an easy way to make a sourdough starter. It’s the first step to making sourdough bread, sourdough pizza crusts, and sourdough pancakes.

What is a sourdough starter?

Sourdough starter doesn’t use any conventional yeast. It’s “wild yeast” used in place of packaged yeast. It takes time to grow the starter and get it to a point where it’s active, but maintaining it is incredibly simple.

If you make some of this now, it can be stored it in the fridge for later. That way if there’s ever a time when you can’t find yeast, this starter will be there.

How to Make Sourdough Starter

I’ve followed many, many methods for making sourdough starter and ended up wasting a ton of flour and dumping out a bunch of discard. Now, I start with a small amount of starter and work up from there depending on how much is required per recipe.

I use a 1:1:1 method. Meaning equal amounts of water, flour, and starter by weight each time. I don’t eyeball or use a measuring cup, although you can but the results will vary. Instead all the ingredients are weighed on a kitchen scale.

Feel free to use more if desired as long as it’s a 1:1 ratio. Stir to combine into a thick, sticky paste. Cover the jar with a piece of plastic wrap or a coffee filter secured with a rubber band. That’s it for Day 1.

On Day 2, there will be little to no change in the starter. It may smell a little pungent but as far as appearance, the starter will look very similar to Day 1. The first two photos above show examples of a sourdough starter on Day 2.

Day 3 is when there may be some visible changes in the starter. It will most likely have a strong, stinky smell, and there should be some puffiness or bubbles present. The third picture above shows a starter on Day 3.

You can see some growth and a row of large bubbles along the top. There may also be a thin liquid that appears in the center or on top of the starter called “hooch.” The hooch can either be stirred in or poured off.

At this point, it’s time to start feeding the starter twice a day at equal intervals. Usually this is about 12 hours apart or as equally spaced out as your schedule allows (think 9 a.m. and 9 p.m.).

Now is when the 1:1:1 ratio comes into play. Measure out 50 grams of the starter (discard the remaining in the trash), 50 grams of water, and 50 grams of All-purpose or bread flour. Again, the amounts can differ, that’s not a big deal as long as it’s a 1:1:1 ratio.

From here on out, you’ll want to feed the starter the same kind of flour every day. If you start feeding it bread flour on Day 3, then stick with bread flour. If you start with All-purpose, that’s fine. Just make sure to continue and feed it All-purpose. Don’t switch it up.

At each feeding, stir it well, ensuring that there are no dry flour patches left. The starter will be thick and sticky but not as thick as Day 1. The color will begin to lighten as the feedings continue. After each feeding, cover the container with plastic wrap or a coffee filter secured with a rubber band and begin to watch for growth.

What are the signs of growth in sourdough starter?

Starter can begin to show signs of growth as early as four days. This isn’t common, but it does happen. Even if a starter shows growth early on, it doesn’t mean that it’s ready to use. A healthy, active, bubbly starter normally takes 7 to 14 days to achieve.

Some common signs that a sourdough starter is growing are large and small bubbles throughout and on the surface, a puffy appearance, and a pleasant smell or aroma.

One of the most noticeable signs is a doubling in size. After each feeding, place a rubber band or piece of colored tape on the jar at the starter’s highest point. It will begin to slowly rise above the tape and over time will double in size. This is when the starter is at it’s most active and should be used for baking.

It’s important to feed the starter after it rises and begins to fall. That’s when the wild yeast has “eaten” all that it can from the flour. Feeding it will replenish the food source and allow it to rise again.

The tell-tale sign that a starter is ready to be used is the float test. Drop a dollop of starter into a glass of water, and if it floats, it’s ready to be used. Starter can appear bubbly, double in size, and have a pleasant smell, but if it doesn’t float, it may not be ready.

Why isn’t the starter doubling in size?

I’ve been here a few times, and it’s frustrating. Not to mention you’ve spent a lot of time, money, and flour. Here are a few reasons why the starter may not be rising.

How to maintain an active starter?

Continue to feed the starter twice a day as long as you plan on using it every few days. If you forget to feed it once or even twice, don’t worry too much. It will be fine as long as no mold grows. Get back into the routine and make sure it’s active before trying to use it in a recipe.

If you are only going to use it once or twice a month or once every six months, refrigerate it.

The picture above shows a jar of starter that I’ve had in the refrigerator for months. There’s a thick layer of hooch on top of the starter that forms after about a week. I always pour it off, measure out the amount of starter to keep, discard the remaining, add the water and flour, and put it back in the fridge. This is done once a week to keep it fed and active.

To use the starter, bring it out of the refrigerator and begin feeding it in twelve hour intervals. As soon as it begins to double in size and pass the float test, it’s ready to go. This may take 2 to 3 days.

How much sourdough starter do I use in a recipe?

The measurements I use to get a starter up and going are small (50 grams of each ingredient). That’s so you don’t waste a lot of flour, bottled water, and discard in the process of making the wild yeast starter.

Many recipes call for 100 grams or 200 grams of active, bubbly starter. That means, you’ll need to weigh out the amount that the recipe calls for when the starter is at its peak (doubled in size).

If you’re curious about another homemade bread, then check out our new honey wheat bread recipe!

*Please see the post/article for extensive information about growing, maintaining, and storing sourdough starter. We've listed tips and best practices along with commonly asked questions and answers to help troubleshoot issues that may arise.

As an Amazon Associate and member of other affiliate programs, we may earn a commission from qualifying purchases.

Is the sourdough bread recipe the same as the rustic sourdough bread? When trying to get to the recipe for sourdough bread it's a different format, moving picture. It says swipe for recipe....I tried swiping but it takes me back to rustic sourdough bread? I'm not tech savvy so I couldn't figure the swipe out. Love you down to earth explanations, what possible things might be a problem, the highlighted things like special utensils and pictures. Recommending your site to a slue of friends!

@Kim, Ok, wanted to make 1 suggestion and 1 question! My new oven doesn't have a pilot light. So I used a ceramic wax cube fragrance electric melting pot. I remove the dish where the wax goes.Changed the bulb to a night light bulb the added several layers of foil to cover the top. I kept my starter on the top of the foil, worked just perfect during the recent Texas snow storm! My new oven has a proof setting. How would I use this for the sourdough recipies? Any bread? I've only made store bought frozen dinner rolls and proofed them! Thanks so much! I have 2 rustic sourdough bowls in the oven...Can't wait to see if I conquered this challenge! I have spread your site to all of my friends. They love it as much as I do! Thank you!👍👌🍞🥐🥖

Thank you so much for the kind and refreshing comment! :)

The recipe you're seeing for the sourdough bread with the "Swipe for Recipe" feature is called a Google Web Story. It's a thing Google released over the last few months, so we're trying it out. It IS the same recipe as the rustic sourdough bread. When you click or swipe on the web story, it will take you to the post with all the information, tips, photos, and the full recipe. From there you can save the recipe to Pinterest or share on other social media (Facebook, Yummly, etc.).

We are so glad that you love the explanations, tips, equipment needed, and step-by-step photos. That means a lot! All of our posts have the same layout and provide the same kind of informative information. We want our readers to be successful in the kitchen, so we don't add "fluff" to the posts. We try to add things that would be helpful. Thanks again, and please let us know if you have any questions. Have a wonderful evening!

Good Morning Cheryl! We do have one and it does not use conventional yeast. I spoke with Kim and we plan on having the sourdough bread recipe out by the end of the weekend (Saturday or Sunday afternoon) at the latest. Thank you for asking and leaving the comment. We appreciate it and wish you a lovely day :)

Yes, ma'am! That is correct. There are some recipes that use discard that way it can be of some use. We'll have a recipe using discard coming out soon. :)